A little about us Our Story 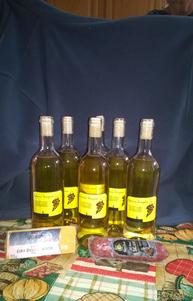 We are Karen and Charles Hofmann to owners of a couple of newly planted vineyards in the process of development. About 3 years ago we set out on an adventure to develop our own vineyard and small farm winery. Since the 1960s we have been going to wineries to test and purchase wines we liked. This actually started with us in Poughkeepsie, New York going to the west side of the Hudson River to a winery in Highland New York.  At that time we like many other young people had a liking for sweet wines and they made a Pink Catawba with a tasting room at Hudson Valley Winery. We alone with some of our friends spent many hours cruising up and down the Hudson River partying on the cruiser in the summer all enjoying the fruits of the vine. Over the years we gradually became more accustomed and desiring the much dryer European wines like Cabinet Sauvignon and Chardonnay. This continued into the 1980s as we went to more and more tasting rooms from New York to California and even some places like in Michigan. Then as business travel in the 1970s began to take us to Europe, especially Germany and Northern France we developed a taste for some of the wines more commonly served and for sure a much greater variety then we knew here. There one of the more common wines we grew to enjoy was Müller-Thrugau and eventually Riesling both white grapes. The Riesling wine which was served from quite sweet to very dry and to us had a bit of a sour apple taste that took a bit to get used to. We were also introduced to other more common wines like Müller-Thurgau and Gruner-Veltliner. Finally in the late 1990s we were introduced to Dornfelder produced by a small winery named the Besenwirtschaft Guggugsnecht on Professor-Hubbuch Strasse 21, 76703 Kraichtal. We would bring home a number of bottles on each trip until we found it being produced in the Finger Lakes wineries.
We then moved to Tucson Arizona in 1992 and there were a couple small wineries that we would go to and taste test and make some small purchases, but they did now seem to compare with the ones we had become used to in upstate New York and even a few in eastern Pennsylvania. After moving from Poughkeepsie New York to Chicago, we spent many weekends with our children on Long Lake south of Kalamazoo, Michigan. On our way back and forth there were a number of small start up wineries and while the tasting was good, often the wine was only good for cooking when we got it home. After retirement we spent our summers at our lake home on Lake Reflection in Little Meadows, Pennsylvania and winters in Arizona, so we continued to have plenty of access to the eastern wineries that were in many way quite similar to those we had frequented in Germany and France. Finally in 2011 we decided we needed some country land in Arizona to get away from the city and enjoy on occasion. It was because of this and a man on the radio advertising land in Cochise County that got all this started. On our return trip to Tucson we stopped at Charon Winery alone with a few others to do some taste testing and it was here that the owner suggested one might be able to grow wine grapes down in the area we were purchasing some land on Tombstone Heritage Ranch. Also one of the local folks showed us how well some grapes they had planted were doing. We then contacted on of the growers in upstate New York and ordered our first 300 plants and had the soil tested. It was with a great surprise how well the soil in this area tested with its deep sandy loam and low Ph. In fact it was suggested and we did test the soil a 2nd time as it was not normal we were told to have such low Ph similar to upstate New York soils, not common in western soils. Since our first planting in 2013, a number of close by owners in Tombstone Heritage Ranch have also planted similar grapes to the ones we have planted. So here we are now we have our 3rd year of planting. We will continue to add several hundred plants each year to our 3 vineyards increasing in volume the wine grapes that we find do the best and produce the quality of wine Karen and I have become accoustomed to. We now have more than a year of experience in making our own wines from grape juice of many varities that we are considering offering in the future in our Tasting Room and pictured here is one of our first for home consumption Rieslings we produced.

Following are a couple of pictures of our first planted vineyard name Hofmann Vineyard a totally solar powered vineyard with year around guest house. The 2nd picture has our son Lane and wife Danielle along with their sons Adam and Evan Hofmann. This was our planting crew that helped Karen also pictured do the 2014 planting. Turns out that Adam and Even are excellent equipment operators used to make the planting holes and set the posts that hold the grape arbor wires.   Our son Curtis and wife Maureen with their children Bill, Ryan and Kathryn while not being able to help with the planting due to school schedules in Pennsylvania helped prepare the planting areas in both 2013 and 2014 including the irrigation lines underground. It turns out that all our grandchildren having lots of practice playing games on their Xbox are very precision operators of the controls on the backhoe. I guess our granddaughter Kathryn has also now proved that a backhoe is not only a boys toy, but quite good for girls as well.

If you are interested in our family history, you can go to our Hofmann website at www.hofmann-pages.com

In 2012 as we made plans to build the first Vineyard on High Lonesome Road in Tombstone Heritage Ranch, we found that the Rural Electric Company we would need to supply us power wanted nearly $100,000 just to bring power to our property. We were also told that other in the future that might take advantage of this investment would not be accessed to help us. This they told us was a change as it was too much of an effort on their part to administer this as they had years. As we drive thru Cochise County, we find that much of the area is not serviced by Electric Power which seems totally counter to the purpose that the United States Congress had in mind when they make Rural Electric possible. This may well contribute to why Cochise County is considered one of the poorest in both Arizona and in USA in general.